Get our latest news, events and promotions
02Oct
2009

After many weeks of planning, shipment, cleaning up and preparing for use the diving bell that has been provided by Global Industries Asia Pacific Pte Ltd  is now in operation for our IMCA Diver Medic courses. The bell was found in the Global Industries Indonesian Batam yard and after discussions with Global Industries regional management it was agreed to be provided for the use of training divers in simulated bell rescue and CPR drills. Located at KBAT’s practical training facility in Changi and now sitting on a purposed built frame allowing access from the bottom door- DMT students practice diver

Hello KBAT will be conducting their 5th NEBOSH International General Certificate to be held in Indonesia at the resort Island of Bali during August 3rd – 15th. Full details are outlined in the attached information sheet (click this link to download). The ideal location to study and relax in the resort Island and gain the NEBOSH IGC qualification is an opportunity not to miss. With a limited number of seats available we would recommend that if you have been looking to attend the NEBOSH IGC course and want to go to Bali to do so – Book early!!! Please contact us

Hello The “ Spirit of Singapore Expedition 2009”, intends to climb several virgin peaks in the Tien Shan mountain range in Central Asia. Stretching across large tracts of China (Xinjiang), Kazakstan and Kyrgyzstan, the Tien Shan range contains one of the highest concentrations of unclimbed peaks in the world. The expedition will focus on peaks in the Sary Dhaz range, a quiet, rarely frequented area, and far from the popular 7000m peaks in the area. The 2009, the Expedition will not only attempt more virgin peaks than the 2005 exhibition, but will also attempt the first ascent 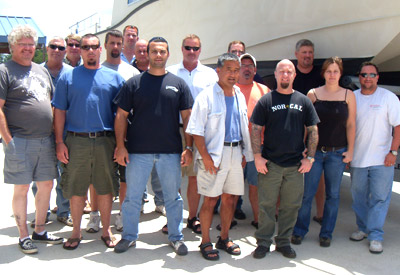 A third IMCA approved ALST, ADS & BDS course took place in Lake Charles Louisiana in August. The course was once again full with various leading US diving companies sponsoring their employees and a few students self-sponsored. There was a lot of experienced diving personnel on the course, from Superintendents to Rack Operators/ ALST’s each with their own unique offshore experiences which made for lively discussions during the lectures. The course took place over 11 days with all students successfully passing the end of course examination. The next course will take place 7 th to 17 th December in the same

Hello The third issue of our bi - monthly newsletter is packed with events that KBA and subsidiary companies have carried out during the recent months and will be conducting in the coming months ahead. You will read that the focus of this newsletter is on Training – as by introducing exciting new courses later this year will enable you to plan your schedules so that you will be able to attend them and take full advantage of not only specialist training and competency development such as the Governors Risk Analysis and Investigator 3- TOPSET ® Incident Investigation Course, but be involved with NEBOSH